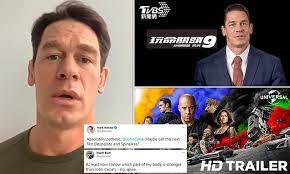 Cena was being interviewed on Taiwanese TV to promote F9, the new Fast & Furious movie

He said, in Mandarin: 'Taiwan is the first country that can watch F9.'

Chinese fans were irate that he referred to Taiwan as a country, and not part of China

They flooded Weibo - where Cena has 600,000 followers - with complaints

Cena found himself at the heart of the complex issue and issued an apology, on Weibo, in Mandarin

He groveled: 'I love and respect China and Chinese people. I'm very, very sorry about my mistake.'

Fast & Furious 9 smashed through the box office during its May 21 release in China last weekend, raking in $148 million