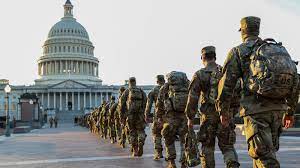 Some 2,000 National Guard troops are leaving the Capitol, nearly five months after they were deployed there to boost security after the January 6 riot. The building won't be opened to the public due to a police shortage.

The troops will begin the full withdrawal from the Capitol grounds on Sunday, retired Lt. Gen. Russel Honoré, who is leading a review of the Capitol's security, confirmed to CBS's 'Face the Nation' in an interview aired on Sunday.

The troops are heading home as the Capitol Police, despite reports of their ranks being severely depleted, did not request an extension of the mission past the May 23 deadline, the DC National Guard spokesman told the media earlier this week.

The National Guard has been in the nation's capital two months longer than originally planned. The troops were scheduled to leave on March 12, but the Capitol Police asked the Pentagon to extend the deployment, drawing criticism from the National Guard Association, which blasted the continuing presence of soldiers in the city as "completely inappropriate at best, illegal at worst."