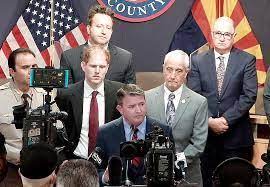 Please allow me to reiterate my strongest belief that the two elections currently under review, California and Arizona, are collectively and individually, the most important two events in America, today.

To recap, A California lawsuit, filed by Paul Preston's organization alleges that millions of California's ballots were improperly printed and violate the statutory requirements of what is to appear on a LEGAL ballot. The proof is undeniable. The variable in question is the integrity and impartiality of the Judge in the case. The court has "slow-walked" the case forward. However, the delay tactics are behind the case, or so it would seem. If the Judge agrees with the merits of the suit, the entire California suit would be thrown out and a new election would necessarily be ordered and the present 55 electoral votes cast for Biden would be disallowed and Biden would trail in the electoral vote total.

The Arizona case does not have electoral vote impact that the California case does. However, the political shenanigans and outright criminality of the Maricopa County officials associated with the 2020 election are criminal beyond belief. And the behavior of the Maricopa County Board of Supervisors has been reprehensible and criminal. The Supervisors have repeatedly refused to comply with a court order to surrender the election codes for the Dominion voting machines and then when cornered invented a "fish-tale" in which they deflected weeks of refusing to comply with the court and with the audit team and then on Wednesday (May 19) confabulated a new lie about the custody of the codes. The codes allow the election officials, on election night to maintain voter machine integrity, check for breaches of security and can help to maintain accuracy.