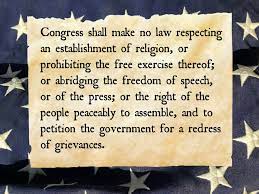 Facing long tours overseas, injury or death, new recruits entering one of the branches of the U.S. military could always maintain morale by knowing that they were protecting cherished freedoms — namely the First Amendment.

Many of the protestors expressed the portion of the First Amendment on January 6th that the Country Club in Washington DC wasn't prepared to represent, including an Air Force vet who was killed in cold blood.

They had Assembled and petitioned the government for a redress of grievances over a Presidential election that even today still shows instances of fraud.

They're now targeted by a commission to further politicize the expanding tyranny in the hill, deeming patriotic Americans a violent white supremacist mob while video reluctantly leaking out clearly shows the truth.