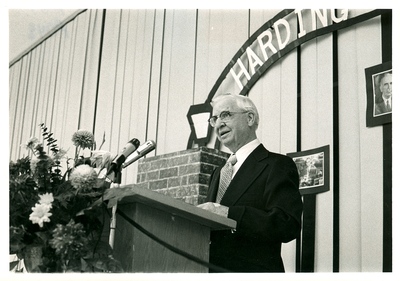 George Benson, son of Stuart Felix Benson and Erma Rogers Benson, was born on his parents' small Oklahoma farm in Dewey County on September 26, 1898. He attended several elementary and secondary schools in the area and then attended classes at Oklahoma A&M until transferring to Harper College in Harper, Kansas. In 1924, Harper College merged with Arkansas Christian College in Morrilton (Conway County) to form Harding College, a private school associated with the Churches of Christ. Benson moved to Morrilton, where he graduated in the spring of 1925. On July 2 of that year, he married Sallie Ellis Hockaday; they would have two daughters. In the fall, the newlyweds left for China to engage in missionary work for the Churches of Christ.

A little less than a year later, a communist uprising drove the Bensons from their mission. Christian converts helped smuggle the couple from the area. They went first to Hong Kong and then to the Philippines, where they stayed until 1928 when Chiang Kai-shek took control of China. Upon their return to China, Benson founded the Canton Bible School. In spite of the school's success, Benson felt the need for additional education himself to lend more prestige to his leadership, and so the Bensons and their daughter returned to the United States in 1930; he completed a master's degree at the University of Chicago in 1931, and in 1932, Harding College conferred the LLD upon him as he prepared to return to China.