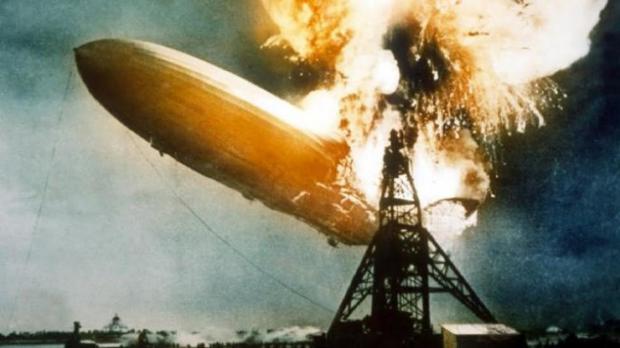 It was a horrifying disaster which was caught on film and shown on newsreels across the world.

The hydrogen-filled Hindenburg airship exploded in New Jersey on May 3, 1937 after travelling nearly 4,000 miles across the Atlantic Ocean from Frankfurt, Germany.

To this day, experts are still unsure what caused the accident, which killed 35 passengers and crew.

Existing newsreel footage shows a close-up view of the airship as it burned while falling from the sky.

Now, incredible new video shot by an amateur photographer from a different angle has provided new clues about what might have happened.

The clip, filmed on a Cine-Kodak 8, Model 20 camera, was shot by Harold Schenck, whose nephew Bob Schenck features in a new PBS documentary revealing the unseen amateur video for the first time.

Hindenburg: The New Evidence, which is available to US viewers this evening, reveals how Schenck was standing in a different place to assembled members of the press, meaning he was able to get a wider view of the ship.

The film was ignored in the initial investigation into the disaster and only came to light when Bob showed it to aviation historian Dan Grossman, who features in the new show.

Crucially, the video shows the moment the airship's landing ropes were lowered, four minutes before the craft - which is believed to have been leaking hydrogen - exploded.

This adds new weight to the theory that the ropes conducted enough static electricity to cause a spark which ignited the leaking gas.

Schenck's film also gives a new wide view of the horrifying moment after the ship exploded. It is seen in a ball of flame as it falls to the ground in front of horrified onlookers.