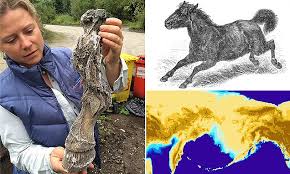 Analysis of ancient bones and teeth has found similar DNA in horses that died out at the end of the last ice age in North America and those in Eurasia that were later taken to North America by Europeans.

This was as a result of movement through the Bering Strait Land Bridge, according to the scientists from the University of California.

'They died out about 11,000 years ago, but that's not much time in evolutionary terms. Present-day wild North American horses could be considered reintroduced, rather than invasive.'

Horses went locally extinct in North America during the last Ice Age and were reintroduced by Hernán Cortés in 1519.

History has suggested that the horse brought across the Atlantic Ocean were invasive animals when released in North American.