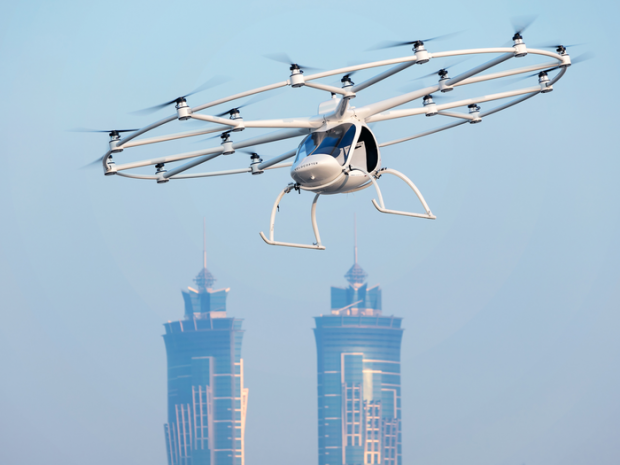 The newly unveiled VoloConnect is designed to complement the company's existing aircraft built for travel around busy urban centers, by lifting folks away from the hustle and bustle and out to the suburbs.

Since entering the flying taxi scene back in 2013, Volocopter has introduced a few different iterations of its all-electric aircraft, incrementally refining the design to make it more aerodynamic, more stable and more powerful.

Its eVTOL (electric vertical takeoff and landing) aircraft known as VoloCity is built to carry two people between stations known as VoloPorts spaced around 30 km (18 miles) apart, with autonomous navigation systems handling the entire flight. The company has also designed a heavy-lift drone for carrying cargo weighing as much as 200 kg (440 lb), and even adapted the technology to build a crop-spraying drone for John Deere.

The new VoloConnect is a bit of a departure from the design of these previous aircraft, most notably through a hybrid "lift and push" system it uses to travel through the air. Where the other Volocopter aircraft has functioned essentially as a giant drone, the VoloConnect uses horizontal rotors to lift itself up into the air and adjust its altitude, and then a pair of propulsive fans kick in to send itself forward.