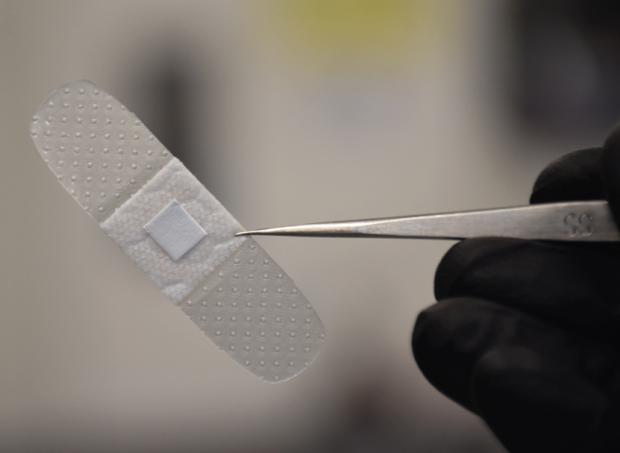 Developed by scientists at the University of Rhode Island, the experimental bandage contains modified single-walled carbon nanotubes, which are securely embedded within the dressing's individual polymer fibers. This arrangement keeps the nanotubes from leaching into the wound, yet still allows them to react to chemical compounds within the wound site.

One such compound, hydrogen peroxide, is produced by the body's white blood cells when pathogenic bacteria are present. That chemical in turn affects the color and intensity at which the nanotubes fluoresce when exposed to bright light. A compact device placed over the bandage could both trigger and analyze that fluorescence, subsequently transmitting an alert to a separate gadget such as a smartphone, if necessary.

"The hope is that the device will diagnose an infection at an early stage, necessitating fewer antibiotics and preventing drastic measures, such as limb amputation," says Asst. Prof. Daniel Roxbury, who worked on the project with former grad student Mohammad Moein Safaee. "We envision this being particularly useful in those with diabetes, where the management of chronic wounds is routine."

Plans now call for the bandage to be tested on live cultured cells in petri dishes, potentially followed by testing on lab mice.