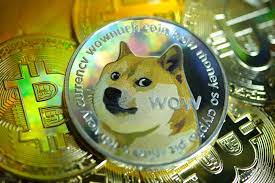 Starting out as a joke by software engineers Billy Markus and Jackson Palmer, dogecoin was based on the "doge" meme that rose to popularity in 2013. The meme portrays a Shiba Inu dog alongside nonsensical phrases in multicolored, Comic Sans-font text.

When they created it, Markus and Palmer intended dogecoin to be a faster but "fun" alternative to bitcoin. But the cryptocurrency has since found a growing community online.

Now, dogecoin's market value is listed at nearly $50 million, making it one of the top five cryptocurrencies, according to data from CoinMarketCap.

This recent run isn't the first time that dogecoin's value has soared. Like many cryptos, it has a tendency for volatile price swings.

Its most recent run started off the back of enthusiasm from a Reddit group called SatoshiStreetBets. Similar to the WallStreetBets subreddit, which helped fuel the rally of GameStop stock at the start of the year, SatoshiStreetBets aims to drive up the prices of cryptocurrencies such as dogecoin.