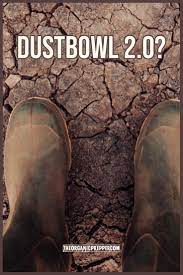 The Great Depression seems to be repeating itself and we might also be facing a modern-day Dust Bowl.

The Dust Bowl was the name given to the Southern Plains region of the United States during the 1930s. A ten-year drought as well as several economic and agricultural factors attributed to the devastating high winds and dust. The 1930s drought exposed topsoil from over-farming and intense farming practices.

Many of these late nineteenth and early twentieth century settlers lived by the superstition "rain follows the plow." Emigrants, land speculators, politicians and even some scientists believed that homesteading and agriculture would permanently affect the climate of the semi-arid Great Plains region, making it more conducive to farming.

With property loss and food insecurity on the rise, the United States is coming to resemble the 1930s Great Depression. Minus, of course, the more cohesive culture that existed at the time. But there is about to be another similarity between 2021 and those dark years of economic collapse – a modern-day Dust Bowl.

Now, not even one hundred years later, we see history repeat itself. Centuries of over-farming are now taking a toll on the soil in many states, including Iowa. The nation's Corn Belt, which stretches from Ohio to Nebraska, has already lost nearly 1/3 of its topsoil.