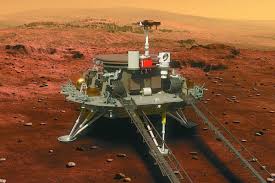 Late Friday night (or early Saturday morning in China), AP News confirmed that the rover, called Zhu Rong, successfully landed on the Red Planet via state media. "The scientific research team confirmed via the telemetry signal sent by the Zhu Rong Mars rover that on May 15, the Tianwen-1 Lander successfully landed in the pre-selected landing area in the Utopia Plain of southern Mars," CNSA said.

Landing on the Red Planet is dangerous - CNSA said it was "nine minutes of terror" as the lander descended toward the planet's surface at a high rate of speed, and the thin atmosphere didn't have enough friction to slow the descent.

Only NASA has reached the surface of Mars intact on multiple occasions. According to the diagram above, the lander relied on parachutes and rocket engines to slow the descent. This method is similar to NASA's, who has landed Curiosity and Perseverance rovers on Mars.

Global Times reported the spacecraft reduced its altitude from its typical orbital trajectory and began the descent around 1600 ET Friday (or about 0400 local time in China Saturday).

An uncrewed Chinese spacecraft landed on Mars, making China the second nation after the U.S. to reach the planet https://t.co/K7IJGykKj5 pic.twitter.com/kI1E04f46p