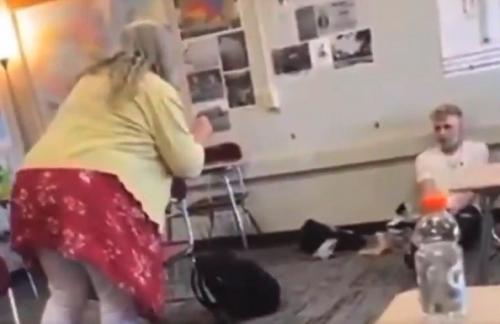 A video of the scene went viral after a Poynette, Wisconsin teacher (with clearly severe comorbodities) blasted a student for not wearing a mask.

"I don't care if you're vaccinated you little dink," the belligerent teacher says during the exchange.

"I don't want to get sick and die. There's other people you can infect. Just because you're vaccinated."

The student, sitting against the wall, politely and calmly repeatedly says "okay" in response to the verbal abuse.

"You know what? You're not a special person around here. You should hear how everybody talks about you around here. YOU'RE A JERK," the increasingly aggressive teacher shouts.

The student replies that he doesn't care what people are saying about him, which appears to further enrage the teacher...

"You're a jerk," she repeats. "You need to have respect for other people in your life."

"You're not a big man on campus," she says as the video cuts off.