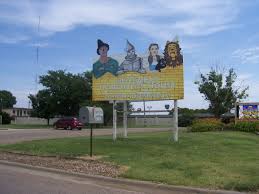 Lyman Baum, who much preferred to use his middle name Frank, was a sickly child. Growing up on an estate in New York, he enjoyed writing and the theater from a young age.

When he was twenty-four, his father built him a theater in the town of Richland, NY, but it burned to the ground less than two years later.

Dorothy's House is from the Wizard of Oz

He was in his early forties and living in Chicago when the first Oz book was published. He followed it up with thirteen more books set in that land, and numerous plays, none of which was successful.

He spent 12 years in South Dakota, during which he was a staunch foe of its native peoples. Which is horrible, to say the least.

The town of Liberal, Kansas has taken on the role of Dorothy's hometown.  Liberal hugs the Oklahoma line in the southwest corner of the state, on US 54.  If you're driving from Hooker to Kismet, you'll go right through it. Or take US 83 two and a half hours from either I-70 or I-40.