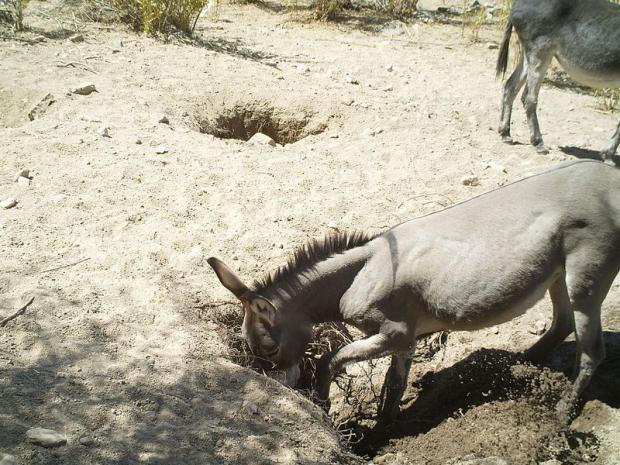 This find has thrown a wrench in the prevailing wisdom that feral equids, who were introduced by the Spanish, are pests that should be removed—as the scientist behind the research suggests they could be fulfilling a vital function once performed by now-extinct mammals from the Pleistocene.

In modern conservation, if an animal turns up where it didn't live a few hundred years ago and thrives there, it's typically considered invasive. Invasive species are almost always seen as a menace, with animals like foxes, cats, goats, mice, sheep, pigs, cane toads, rats, carp, and others terrorizing delicate ecosystems in Madagascar, Galapagos, and Australia, to name a few examples.

The Sonoran and Mojave Desert ecosystems currently host 95,000 wild horses and donkeys, which are considered invasive pests that outcompete other native herbivores, and suppress or trample native plants.

Conservation doctrine would say they should be exterminated or removed, but sometimes it's more complex than that, and Erick Lundgren from the University of Aarhus in Denmark has shown that the desert fauna's eagerness to drink from these equine wells should be considered before making any decisions about the species' future.

Lundgren found that 59 different species frequented the water holes, and that species diversity around them was 64% higher than the ecosystem's square-mile average.