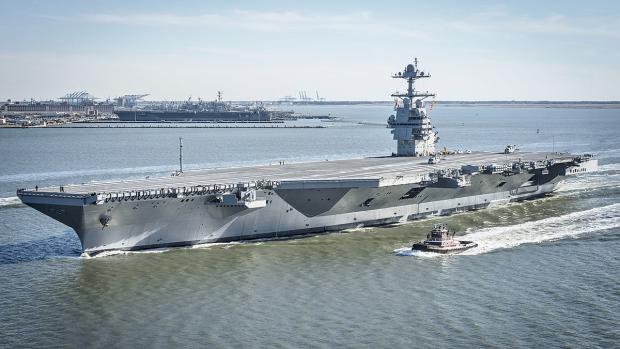 There were supposed to be eleven weapons elevators. In May, 2021, the US Navy confirmed four lower-stage advanced weapons elevators will not be certified until later in 2021. This will be after shock trials take place. Two of the four undelivered lower stage elevators are being tested, and the final two elevators are in the last stages of construction.

A shock trial, known formally as a full ship shock trial (FSST) and sometimes called a shock test, is a test of the combat survivability of the design of a new class of ships. A shock trial involves setting off one or more controlled underwater charges near the ship being tested, and then measuring the ship's response to the underwater shock caused by the explosions. The test is intended to verify the ability of the ship's structure and internal systems to withstand shocks caused by enemy weapons, and to reveal any changes that need to be made to the design of the ship's structure or its internal systems to meet the ship's intended survivability standard. Shock trials are nominally to be performed on the lead ship in a new class of ships, but there have also been cases where the shock trial for a new class was done on one of the subsequent ships in the class.

It seems prudent for the OSD to want to find out if the ship design will need more modifications before it is really ready for combat. Therefore, the Navy will perform shock trials on a ship that has broken elevators before trials begin.