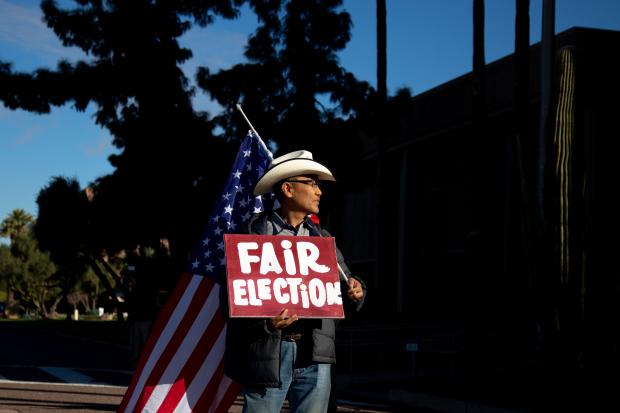 Dominion said in a statement to news outlets on Thursday that it would comply with the audit, but Cyber Ninjas, the firm hired by the Arizona Senate to conduct it along with three other companies, is not accredited by the U.S. Election Assistance Commission.

"Releasing Dominion's intellectual property to an unaccredited, biased, and plainly unreliable actor such as Cyber Ninjas would be reckless, causing irreparable damage to the commercial interests of the company and the election security interests of the country," Dominion said. "No company should be compelled to participate in such an irresponsible act."

Cyber Ninjas did not respond to a request for comment.

Maricopa County officials previously said that they did not have passwords to access administrative functions on Dominion Voting Systems machines that were used to scan ballots during the election, according to the Senate's audit liaison, former Republican Secretary of State Ken Bennett.

"They've told us that they don't have that second password, or that they've given us all the passwords they have," Bennett told One America News at the site of the audit in Phoenix last week.

Both routers or router images and access to election machines were part of the materials the state Senate subpoenaed late last year. A judge in February ruled that the subpoenas were valid and should be obeyed.

Arizona Senate President Karen Fann, a Republican, recently threatened to subpoena county officials if they didn't stop their noncompliance with the subpoenas, but backed off the threat in a letter on May 12.