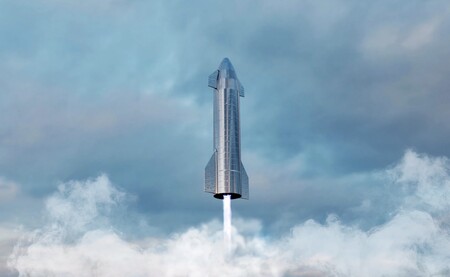 The next SpaceX Starship prototype will be sent into orbit, launching from Texas and making a 'soft ocean landing' off the coast of Hawaii, an FCC filing revealed.

The Elon Musk-owned space firm hasn't confirmed when they will launch the prototype, but the filing revealed the flight will last about 90 minutes.

SpaceX has completed a number of tests on the 160ft tall rocket, which is about the size of a 16-story building, with the most recent, SN15, landing on the launch pad.

The next version will be bigger still, standing at 400ft tall thanks to the the Super Heavy booster that will lift the spaceship into orbit before separating and falling back to Earth, landing in the Gulf of Mexico 20 miles from shore.

The orbital part of Starship, the portion tested so far, will perform a powered, targeted landing after achieving orbit, coming down 60 miles off the Hawaii coast.

'The Orbital Starship will continue on flying between the Florida Straits. It will achieve orbit until performing a powered, targeted landing approximately 100km (~62 miles) off the northwest coast of Kauai in a soft ocean landing.'

A year ago, Elon Musk announced to SpaceX employees that Starship progress was a top priority, with progress accelerating 'dramatically and immediately.'

That resulted in a rapid increase in Starship prototypes being built, often with a new prototype ready before the previous one had even been tested.