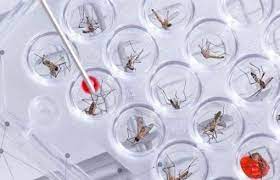 At the same time the controversial Presidential Science Adviser nominee of Biden is involved in development of the CRISPR technology being used to genetically modify everything from the mosquitoes to the Pfizer and Moderna coronavirus mRNA "vaccines" to gene-edited salmon. How Bill Gates, the Pentagon and the eugenics lobby come together now is alarming to put it mildly .

On April 30 the Florida Keys Mosquito Control District and the Oxitec biotechnology company announced they will begin release of what will ultimately be some 750 million genetically manipulated or gene-edited Aedes Aegypti mosquitos using CRSPR gene editing technology. The Aedes Aegypti makes up only about 4% of the mosquito population in the Keys. The release is bitterly opposed by residents and environmental groups who demanded a referendum in last year's election ballot, but which the Mosquito Control Board refused, curiously. Oxitec and the Board claim the release is to kill off the presence of the Aedes Aegypti mosquito which is believed to carry dengue fever, Zika and other diseases.

The project, which sounds positive in the press statements, is alarming in many respects. First, the refusal to allow a citizen vote on the controversial GMO release. Second, there exists no cost-benefit analysis of the risks versus benefits of releasing millions of mosquitoes whose genetic traits are mutating in often unpredictable ways. Is it worth the risk that an ever more robust variety of mosquito will mutate from the project? No one can say. Traditional mosquito control techniques have worked well until now.

The CEO of Oxitec, Grey Frandsen, has a dark history with the US State Department in the Balkans, as an advisor to the US Navy, and as a Fellow of the George Soros' International Crisis Group that played a key role in the destruction of Yugoslavia in the 1990s. With no previous experience in biotechnology, Frandsen appears as CEO of Oxitec in 2017. Oxitec, a UK company, is now owned by Third Security, a US venture capital firm in Radford, Virginia headed by Randal J. Kirk who also owns the gene-edited salmon producer, AquaBounty.