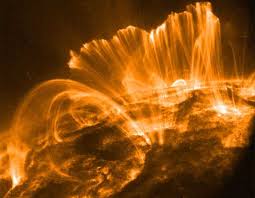 This occurred near the minimum weak point of the solar cycle, and we're going to get much bigger blasts as Cycle 25 ramps up. But if mild CMEs can rattle the Earth's magnetic field this much, things might get much more exciting when moderate or strong CME's shake the cage. Satellites and networks could be in trouble. "Grid's Away"…

Is Earths magnetic field weaker or more vulnerable than we thought? How could we miss that?

As Cap Allon of Electroverse said:

"Nobody saw the KP Index hitting 7.

…when I say nobody, I mean nobody predicted this: not NASA, NOAA, ESA or IPS in Australia."

It was not dense, and the filament released was hardly cause for concern.

"There is absolutely nothing in the history of space weather that advises the expectation of a strong geomagnetic storm off a mild CME produced by the eruption of a small plasma filament," says Ben Davidson of SpaceWeatherNews.com.

What happens when the next one hits on the heels of a coronal hole stream?

Or if the filament was bigger?

What happens when that X-class solar flare is launched in our direction?