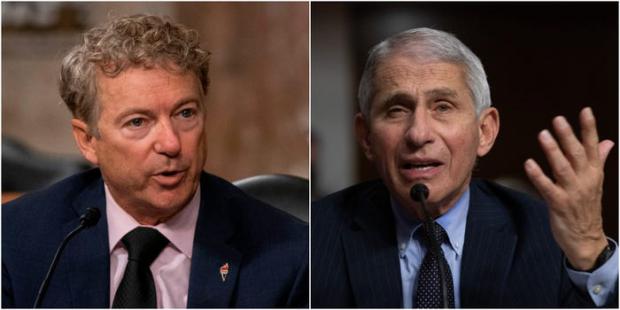 Paul was attacked by leftist media Wednesday for merely questioning Fauci's extensive role in granting funding to the Wuhan Institute of Virology at a Senate hearing.

CNN's Anderson Cooper declared that Paul should "have more respect at least for medical science."

Paul hit back, noting that Fauci is lying about the NIH's involvement in funding of the Wuhan lab.

Now in a further appearance on Fox And Friends, Paul has gone even deeper, accusing Fauci of being personally to blame for the global pandemic.

"The person they hired to investigate the lab for the WHO perspective is the guy who gave the money," Paul urged.

"So NIH gave the money to EcoHealth. The head of EcoHealth – they got him to investigate whether Wuhan was doing anything inappropriate in their lab. But if they were then wouldn't he be culpable?" The Senator questioned.

"Doesn't he have a self interest in smoothing things over," Paul continued, adding "I'm not saying he did cover things up but you wouldn't appoint someone who is in the line of the supply chain of giving the money to them."

As Infowars reported in April 2020, the NIH awarded a $3.7 million grant to the Wuhan Institute of Virology to conduct coronavirus gain of function research.

Additionally, the results of the US-backed gain of function research at Wuhan was published in 2017 under the heading, "Discovery of a rich gene pool of bat SARS-related coronaviruses provides new insights into the origin of SARS coronavirus."

Fauci has come under increased scrutiny as the NIH's involvement with the Wuhan lab is being called into question.