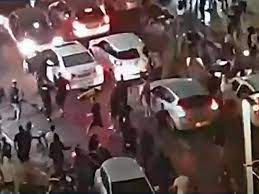 Israel state broadcaster Kan was covering unrest in Bat Yam, just south of Tel-Aviv, where Israeli rioters had taken over the streets.

During the live broadcast, Kan's camera crew and reporter picked up on what was essentially a 'lynching' in progress after a Palestinian man sped past Jewish protesters before crashing his vehicle, apparently trying to escape. He was quickly dragged from the car and what happened next was horrifying and graphic...

The man was brutally beaten by some 20 people, including with metal objects, but thankfully survived after falling unconscious and being taken to the hospital. Police were reportedly very belatedly on the scene. "We are watching a lynching here," the Kan correspondent said live on air as the camera zoomed in on the unconscious man.

CNN detailed of the footage, "In Bat Yam, south of Jaffa, graphic video Wednesday night showed a Jewish right-wing mob trying to lynch an Arab driver. Police say the man was dragged from his car before the assault began. Video shows about 20 people hitting him with metal objects and kicking him in the head repeatedly. He was taken to hospital where his injuries were described by police as moderate."

Other reports say the man has had to undergo operations, with little actually confirmed about his current condition. The violent incident but especially that the Israeli Public Broadcasting Corporation (Kan) aired the disturbing footage sparked outrage both domestically and internationally.

Israelis and some Western press reports were quick to point out that elsewhere in Israel Arab mobs had also lynched Jews: "In Acre, north of Haifa, a lynching attempt by an Arab mob left a Jewish man critically wounded, according to Israeli police. A police spokesman said the mob attacked police officers with stones before attacking the victim with stones and iron bars," CNN noted of one incident.