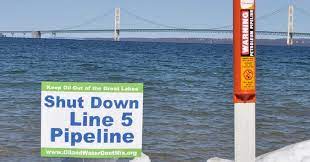 As the entirety of the southeast United States hunts for gas and wonders if they are going to be able to make their way to their jobs the next day as a result of an alleged cyberattack on the Colonial Pipeline, Michigan's Governor, Gretchen Whitmer, is now attempting to shut down another pipeline running through her state.

As a result, the state of Michigan has told Enbridge, a Canadian energy company, that it has to shut down an oil and gas pipeline by May 11. What's even more strange than closing down a pipeline at a time when the entire Southeast of the country faces a gas shortage is that Whitmer's claims are not completely invalid as most hers tend to be. Whitmer and the state of Michigan are arguing that the pipeline represents a potentially massive environmental disaster if the pipelines burst, leak, or are damaged.

But this new attempt on Whitmer's part is putting strains on the relationship between the United States and Canada.

Enbridge of Canada has refused to comply

Enbridge has, for its part, refused to comply with Whitmer's order and has done so with support from top Canadian officials. The company has, for sixty-seven years, moved oil and gas from Western Canada through Michigan and the Great Lakes to refineries in the province of Ontario but Michigan is arguing Line 5 is too risky to continue to operate. In November, Whitmer announced her plan to revoke the easement granted to Enbridge which allows the pipeline Line 5 to cross under the Straits of Mackinac. Whitmer set May 12 as the deadline for Enbridge to shut the pipeline down.