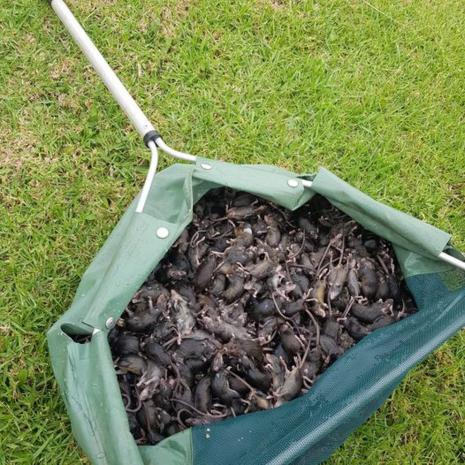 Farmers overrun by millions of mice have begged the government for help - only to be told there is no money left in the Budget.

Homes and farms across NSW have endured masses of rodents within the past few months leaving the majority of their stocks completely destroyed.

NSW Farmers and the Country Women's Association met at State Parliament on Tuesday to detail just how much their lives have been put on hold to cope with the endless stream of mice.

They asked for $25,000 per farm to help buy and set up mouse baits to kill the rodents and save their crops and homes.

But Agriculture Minister Adam Marshall said after spending billions of dollars on the drought crisis, it wasn't possible to offer the same support to those fighting the mouse plagues and they would have to make do with workshops instead.

'The proposal that I've read in media reports would cost anywhere between $600-700 million. After spending nearly $4.5 billion in drought support, I don't have that money on my fingertips,' he told the ABC.

Lisa Minogue, a farmer from Barmedman, in central NSW said the mice kept coming and couldn't be stopped, and the smell they left behind was 'horrific'.