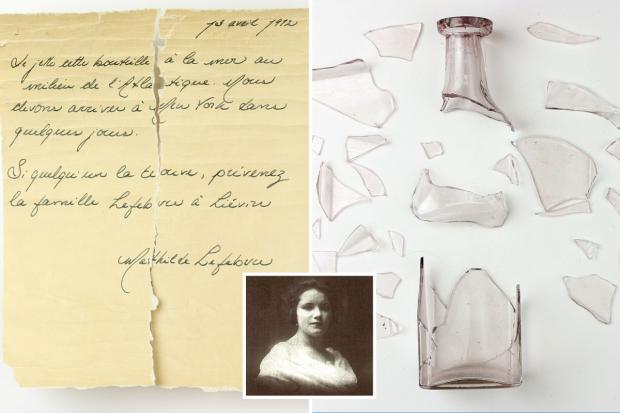 Academics are investigating the authenticity of a message in a bottle which was allegedly thrown from the Titanic just hours before the 882ft liner sank, and washed up in Canada more than 100 years after the tragedy.

The note, dated April 13, 1912, appears to have been written for fun by French schoolgirl Mathilde Lefebvre, a 12-year-old who was travelling to New York City with her mother Marie to visit her father and siblings.

Mathilde perished alongside 1,500 others after the vessel hit an iceberg on its maiden voyage from Southampton on April 14. However, the message washed up on a beach in New Brunswick in 2017 and was handed over to the Universitee du Quebec a Rimouski for study, but has only now been made public.

The note, which is written in French, says: 'I am throwing this bottle into the sea in the middle of the Atlantic. We are due to arrive in New York in a few days. If anyone finds her, tell the Lefebvre family in Lievin.'

Academics have confirmed that the letter appears to be consistent with the period, though there is disagreement about whether or not it is authentic or a hoax produced at the time of the sinking as newspapers eagerly sought to print stories from witnesses or 'last words' from passengers.

There have been three other messages in bottles purporting to be from victims, but just one of these - thrown overboard by a 19-year-old Irishman called Jeremiah Burke - has been authenticated. The other two have been proven to be frauds, researchers told CBC News in Canada.

History professor Maxime Gohier, who is leading the multidisciplinary team of researchers, said the message could be 'the first Titanic artifact found on the American coast'. 'So far, we have not caught a smoking gun of a forgery,' he said in a statement released by the university.

But archaeologist Nicolas Beaudry said that it is too early to conclude if the message was written by Mathilde, calling it just one of a number of 'equally interesting' possibilities'.

Witold Pilecki: The Inspiring Story of the Polish Spy Who Led a Resistance Against the Nazis