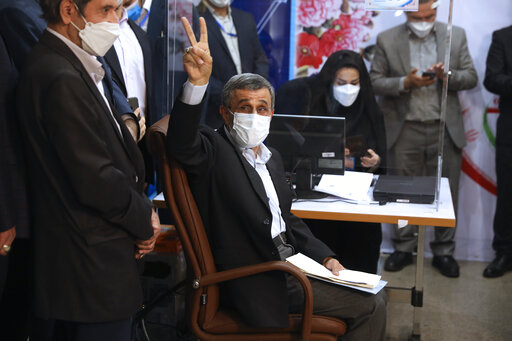 Ahmadinejad's attempt to run again in 2017 disregarded the words of Iran's Supreme Leader Ayatollah Ali Khamenei, who had warned the firebrand, Holocaust-questioning politician his standing for office would be a "polarized situation" that would be "harmful for the county."

This time, however, Khamenei seemingly isn't directly challenging the candidacy of the 64-year-old former Tehran mayor, who joins a wide-open election to replace the relatively moderate President Hassan Rouhani. A council Khamenei oversees ultimately will determine if Ahmadinejad and other hopefuls can run in the June 18 poll.

As Iran negotiates with world powers over its tattered nuclear deal amid tensions with the U.S., the entry of Ahmadinejad could enliven an election that Iranians so far appear unenthusiastic about during the coronavirus pandemic and crushing sanctions.

Thronged by shouting supporters, Ahmadinejad marched to a registration center at the Interior Ministry, where he filled out registration forms. He held up his hands in a "V for Victory" salute before addressing reporters.

"My presence today for registration was based on demand by millions for my participation in the election," he said, adding that the move also came after "considering the situation of the country, and the necessity for a revolution in the management of the country."

Ahmadinejad previously served two four-year terms from 2005 to 2013. Under Iranian law, he became eligible to run again after four years out of office, but he remains a polarizing figure, even among fellow hard-liners. His disputed re-election in 2009 sparked massive "Green Movement" protests and a sweeping crackdown in which thousands of people were detained and dozens were killed.