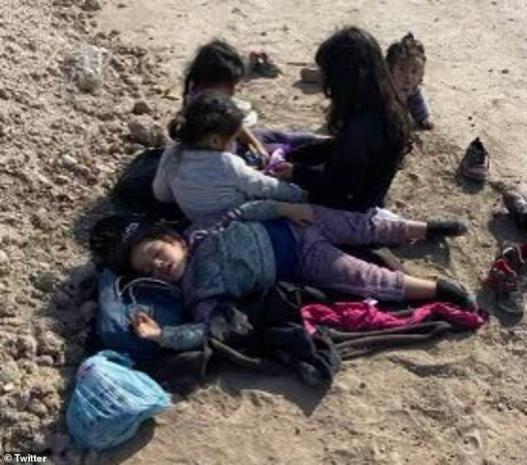 Three of the girls are from Honduras. They are seven, three and two. The other two are from Guatemala and are aged five and 11-months-old.

They are now at Uvalde Station, where they'll be processed, before being given to Health and Human Services.

Jimmy Hobbs, the 75-year-old farmer and his wife Katie gave an interview to Texas Congressman Tony Gonzales which was posted on Twitter after the pair submitted photos and videos to social media groups that campaign for tighter border control.

Gonzalez also shared a gut-wrenching image of the girls lying in dirt. In one of the videos she shared, Katie fumed in the background: 'These children dumped out on the side of the river here on our farm.

'If this doesn't make you mad and make you want to take to the streets, I don't know what will. They have no mother, no father, no nothing. This is one of our workers' wives right here taking care of this tiny one. No one with these children.'