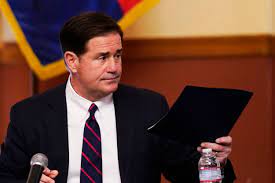 The new law, Senate Bill 1382, introduced by Republican Sen. Wendy Rogers, applies to any store selling guns or ammunition, or their components, and mirrors federal law that was passed on a bipartisan basis.

Ducey's office said in a release that the measure will protect the Second Amendment rights of Arizonans by "safeguarding against frivolous lawsuits that have no connection to unlawful use of firearms."

"With efforts currently underway in Washington to erode Second Amendment rights, Arizona is taking action to protect those rights," Ducey said in a statement. "In Arizona, we're safeguarding manufacturers, sellers, and trade associations."

"Bad actors need to be held accountable, and we will work to make sure they are," the Republican governor added.

"But we're not going to allow lawsuit after lawsuit to slowly tear down the Constitutional rights of law-abiding citizens in our state."

Rep. Rogers previously said of the measure that the right to keep and bear arms must be protected, especially during emergencies.

Democratic Sen. Martin Quezada argued the Legislature has much bigger priorities during the pandemic, such as ensuring people get access to unemployment insurance and don't lose their homes.