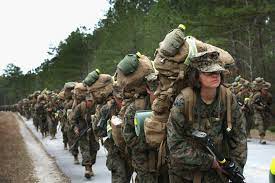 Bloomberg is out with a Monday report chronicling the sad state of affairs the US military has found itself in - notably trying to lure eligible recruits from Generation Z with a cartoon series dubbed "The Calling," which will run on YouTube during May and June.

As Bloomberg notes, "The Army—the U.S. military's largest service—faces a complex set of problems: the eligible recruiting pool into all military services is small; and the newest generation of prospects, Gen Z, has had almost no contact or knowledge of the military, which has largely fought wars abroad since 2001. The Gen Z cohort grew up with technology, the internet, and social media."

The videos feature Emma, the self-proclaimed spoiled kid; David, the Hawaiian kid who at first didn't let himself dream about becoming a pilot; Rickie, who grew up in a religious Haitian family in Florida; Janeen, a singer performing on cruise ships who joined the Reserves with the help of her Vietnam-veteran father; and Jennifer, born to first-generation Dominican immigrants, who worked long hours to make ends meet. -Bloomberg