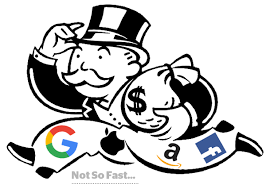 … generations that come after us will have the opportunity to wonder how on earth we had been duped for so long and so pathetically by a few Big Tech monopolists, how it was possible to have such a grand accumulation of power and wealth preserved by a system so bluntly corrupt in its modus operandi.

In October 2020, the House Antitrust Subcommittee issued a damning report of steamrolling corruption.  It was so brazen, Amazon even sold counterfeit copies of products until the targets gave in — even big names, like Nike.  The supergiant went into business against smaller companies, dumping product on the market in impossibly good offers, until it beat them, and stole their customers, and then bought them anyway. (After that customers discovered the deals were not so sweet.) Employees of Amazon even admitted they used private customer data to find market opportunities for Amazon to exploit. The situation is so rapacious now that little companies are not even bought out anymore, they are just cloned and crushed.

And it's not just Amazon. Smaller partners of Apple might find themselves suddenly competing with a new inhouse Apple product, only to also find that Apple updated the OS in ways that made the original product look faulty.

In the year 2017, Facebook and Google captured "an astounding 99% of revenue growth from digital advertising in the US." Thus, though astonishing, it is no surprise that, "due to Google and Facebook's dominance, 'the average growth rate for every other company in the sector was close to 0'."

It's got to the point where startups against any flavour of the Big Tech oligarchs are so likely to fail that investors are balking, and this segment of the market is known as "the kill zone", where few who enter survive.

Killing with Counterfeits (how is this not illegal?)