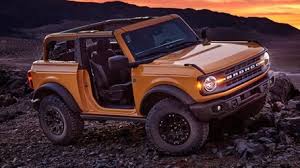 Just in case you're not up on the Ford EV game, the company's CEO Jim Farley, as well as North America Product Communications manager Mike Levine, have been quite active on social media spreading news about the automaker's electric future.

Not long ago, when Levine was promoting the Bronco on Twitter, a Tesla owner replied that he wished the SUV would come in an EV version. Within one minute, Levine had already replied, "Electric Bronco would be amazing." This isn't the first time the topic has come up, and we seem to remember Levine saying something similar in an earlier reply to a different Twitter user.

Fast-forward to yesterday, May 10, 2021, and Ford CEO Jim Farley hinted at the potential for a Bronco EV. In fact, he made it seem as though Ford might already be planning an electric option. As you can see from the exchange below, it looks like the original tweet has a typo – "opinion" should be "option" – but Farley clearly understood.