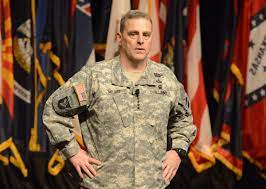 As with most politicians, his words can be revealing, if you know where to look.

Speaking at the HCBU Howard, he asks "Where are the African American Generals?" He might have asked where the Black generals were, but the media corrected him on that. As part of the Biden administration, he is allowed no evil or untoward intention.  Milley's point that 2% of the pilots forty years ago were Black, and that this percentage persists today, and that only 2 of 41 (5%) four star generals are Black, might actually speak to different challenge – a challenge of perspective, as this 2019 demographic fact sheet illustrates.

If Black Americans are 16% of the military, and currently 5% of the four star ranked officers, we may not have a performance or a promotion problem, as much as an evolutionary one.  Today's four star general was likely commissioned 35 years ago, where the number of minority lieutenants was far lower than today. For example, in the mid-1980s, around 70 of West Point's 1000 newly commissioned officers were Black, a percentage of 7%.