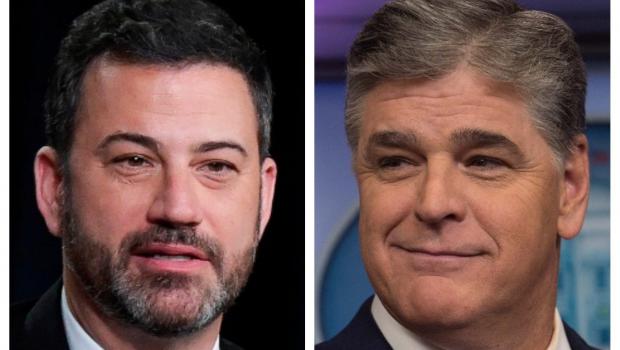 Sean Hannity slammed Jimmy Kimmel on Monday night - reminding the late-night host of the insensitive things he's done on his own show after Kimmel made an off-color comment about the Fox News host's interview with Caitlyn Jenner.

Jenner, who is transgender and is running for governor of California, sat down with Hannity for a Q&A last week. Kimmel's response: 'Is it transphobic to call a trans person an ignorant a-hole?'

That didn't sit well with Hannity, who fired back on Monday, warning Kimmel not to talk about his show.

'This is you: an ignorant a**hole,' Hannity said, reminding the host of 'all the crap' Kimmel's done over the years - and warning him he'd take his concerns higher.

'If he wants me to remind his bosses back at Disney of all the crap he's done over the years ... I'll be glad to,' Hannity said.

Kimmel has been slapped down for insensitive skits in the past, including one in which he donned blackface when playing NBA player Karl Malone.

In another, he put a cucumber down his pants in a crude skit that Hannity referenced in which women had to guess what was in his trousers.

Jenner had come under fire by for comments she made that some people interpreted as insensitive about California's out-of-control homeless population.