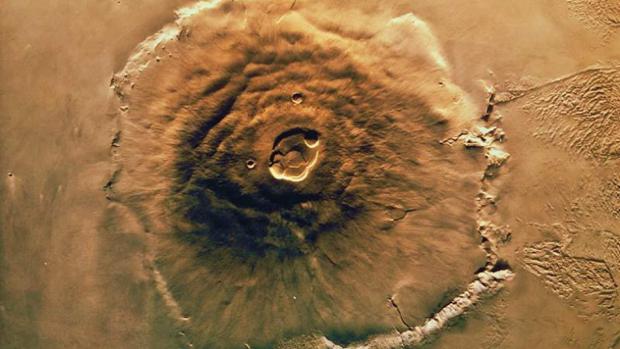 But now, orbiters have spotted a large volcanic deposit that appears to be relatively fresh – only about 53,000 years old – which may lend weight to the idea that the Red Planet was recently, or still is, habitable for subsurface microbes.

Mars still bears the scars of its volcanic past. Its surface is dotted with what may be the remains of gigantic, extinct supervolcanoes, and evidence even suggests one of these erupted non-stop for 2 billion years. Generally though, it's thought that Martian volcanism mostly occurred between about 3 and 4 billion years ago, and had all but died down in the last few million years – the odd, very faint marsquake notwithstanding.

But now, scientists have discovered a scar that appears to be far more recent. Spotted from orbit in a region called the Elysium Planitia, the feature is a dark deposit that measures 8 miles (12.9 km) wide, and surrounds a large fissure 20 miles (32.2 km) long. The team says it doesn't look like anything else seen in the area, or anywhere else on Mars.

Judging by its layers relative to its surroundings, as well as the number of small craters within it, the team calculated its age to be around 53,000 years. It doesn't seem to be the result of common lava flow eruptions, but a more explosive event driven by expanding gases, called a pyroclastic eruption.