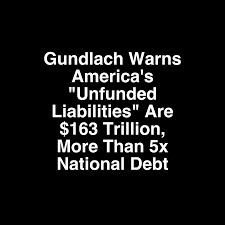 Since then, we have only received more signs that inflationary pressures are growing in the US economy, while a growing number of investors have been persuaded to agree with Gundlach.

The other day, DoubleLine released a recording of another talk given by Gundlach where he elaborated on the inflation theme, while also discussing other issues like the outlook for the US dollar in the face of President Biden's tax-and-spend agenda.

During the course of an hour-plus conversation, much of it accompanied by a slide deck with some of Gundlach's favorite charts, Gundlach tackled a few key topics that he feels could threaten the Fed's ability to backstop financial markets.

Gundlach argued that high-beta stocks and other speculative investments like bitcoin have the most to lose due to a hike in capital gains. After all, who is going to want to take a risk on a long shot if they need to give half of their winnings to the government?