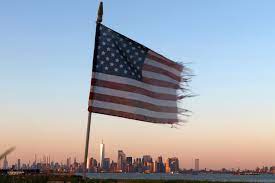 There are terms similar to ventilator that apply to America, terms carrying the implicit adjective terminal. You've heard them, debt, unfunded liabilities, educational failure, moral decay, government dependency, cancel culture, and so forth. Most of these rots have been with us for a long, long time, to the point that every limb is gangrenous, every digit black. Some are more recent, fast acting rot. The whole of America is a weeping pustule of liberal consequences.

The net result is that America is terminal. Our friend the late Rush Limbaugh would have never let those words escape his lips, though he got close in his last year on the radio. But as citizens of Realville we have to face the facts. The socialists and liberals, and even communists from across the water have poisoned America to the point it is certain to die. The Federal Reserve has cranked up its ventilator, unlimited money printing. That's like showing up at a hospice ward with a basketful of gummy bear meth tablets. "Fun for everybody!" Yes, it's that kind of abomination.