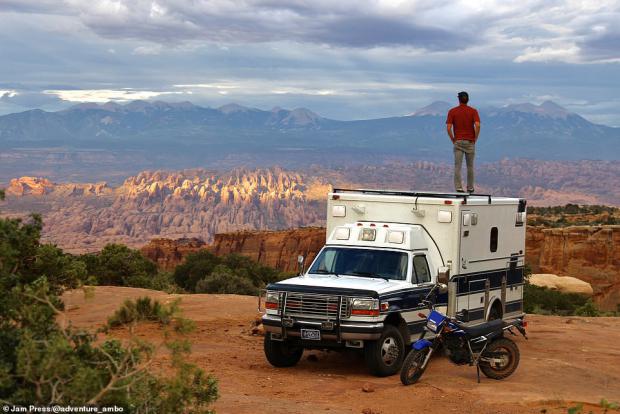 ormer marketing manager Benjamin Harris, 33, from Bozeman, Montana, took on the open road in April 2019, after converting a 23ft. long ambulance into a home – complete with a fully-equipped kitchen, indoor and outdoor shower, double bed and ample storage space.

Benjamin bought his set of wheels from a small volunteer fire department in January that same year and spent three months working on it, starting by ripping out the original interior before adding the new touches.

In total, the nomad's ambulance-turned-home has cost just under $14,000.

But he's made it back in spades; with the vehicle solar-powered, Benjamin now doesn't have any outgoings barring fuel and food costs.

The thrifty man has also been using the profit he made from his house sale to fund his new lifestyle.

'I've always enjoyed travelling so there really wasn't that much of a lifestyle change when I got the ambulance,' Benjamin told Jam Press.

'I went to university for two years and wasn't sure what I wanted to major in, so instead of paying tons of money to continue and trying to figure it out through school, I decided to take "a year off" to see if I could find out what I really wanted to focus on.

'During that time off and after some networking, I ended up as a regional marketing manager for a nationally-branded beverage company.