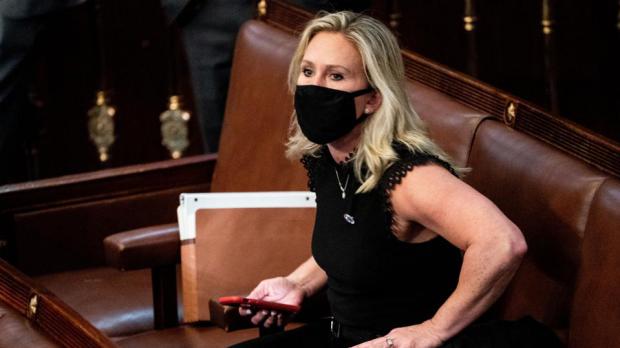 Rep Marjorie Taylor Greene blasted her colleagues in Congress in a fiery interview with Tucker Carlson, claiming the country is 'crumbling' because of the government's gross mismanagement.

The freshman congresswoman made the remarks on Tucker Carlson Today on Wednesday, saying she is 'disgusted' by the way Congress 'wastes' taxpayers' money.

Her attack was aimed not only at rival Democrats but also fellow members of the GOP.

'Republican voters and donors are sick and tired and fed up with weak Republicans that never accomplish what they claim they're going to do,' Greene stated, without naming specific people.

Carlson also asked her about his report that GOP Leader Kevin McCarthy and pollster Frank Luntz are roommates. McCarthy confirmed he rented a DC apartment from Luntz but it's not known if they lived together.

'I was more curious, like, who gets the top bunk and who gets the bottom bunk,' she said in response to Carlson asking, 'Were you shocked to learn they share a toothbrush or are roommates or whatever?'