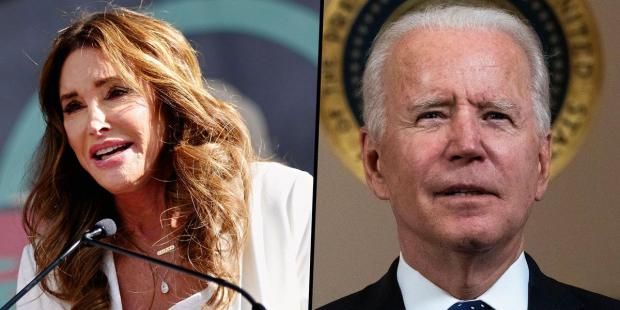 Caitlyn Jenner on Wednesday night shied away from calling herself a Republican, as she discussed in detail for the first time her decision to run for governor of California.

The 71-year-old gold medal-winning Olympic athlete and reality TV star spoke to Sean Hannity on Wednesday, in her first interview on the race.

Jenner, who has never held political office, surprised many when she announced on April 23 that she was taking on Gavin Newsom, the embattled Democrat.

'Biden, I don't think I've agreed with anything,' she said.

'I don't think, since he's been in there, he has done anything for the American worker, maybe other ones.

'So, it is a 180-degree turn in our country, going the other direction, and it scares me.'

Hannity asked what her political allegiance was, and Jenner said she saw herself not as a Republican but rather as 'a thoughtful disrupter'.

She said: 'I kind of played around with that term, and originally I started out as a compassionate disruptor, and then I was thinking the other day, I think I'm more of a thoughtful disruptor.

'I have common sense, I see what is going on.

'I have always been on the Republican side as I have conservative economic values.

'Socially I have been much more progressive all my life. I get it. People need help.

'But you can't have social programs without a strong economy.'

She added: 'I can get along with everyone. I don't care if you are a Republican, Democrat, Libertarian, vegetarian.'