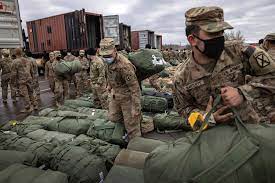 Indeed, this would be an excellent time to end permanently America's policy of foreign interventionism. What good has it done? All that it has done is produce death, suffering, destruction, hostility, anti-American terrorism, and ever-increasing budgets for the U.S. national-security establishment.

I say: Let's bring all the troops home, from everywhere. They don't belong in foreign countries, any more than foreign troops belong here in the United States. Once they return, we should discharge them into the private sector, which would save American taxpayers a lot of money.

That means, of course, that the U.S. government should abandon all of its military bases in foreign countries, including its longtime imperialist base at Guantanamo Bay, Cuba.

But even that isn't enough.