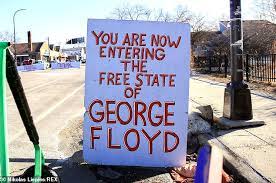 Minneapolis police are refusing to enter the George Floyd Autonomous Zone, with emergency responders instructing a bleeding woman who was pushed out of a window to go to them.

Known as "George Floyd Square," or "The Free State of George Floyd,"  the area surrounding the death site of Floyd has been operating as an Autonomous Zone independent from control of the police or emergency services since September last year, encompassing seven to eight blocks in total. With police refusing to enter lest they face violent reprisals from radical antifa or Black Lives Matter activists, victims of crime are left to fend for themselves, or meet police outside the zone.

One particularly disturbing incident took place at the end of last month, where a female victim was pushed out of a window in a domestic dispute on the corner of 38th and Elliot. Police dispatch audio revealed the attitude taken by police regarding breaching the George Floyd Autonomous Zone. "Is it possible to have her move at least a block away, maybe [to] 38 and 10th?" asked the police officer responding to her 911 call. "She is bleeding and cut everywhere, but we'll call her back and ask her to move a block away," the dispatcher responded, with the woman ordered to move, despite her severe injuries.

About 2a.m., there was a domestic incident in a residence on the corner of 38th/Elliot (pictured). A female was pushed out a window & cut everywhere. She was asked to meet responders a block away from the #NoGoZone.
Our "leaders" said this hostage situation would end. It hasn't. pic.twitter.com/AqnjfJenVK