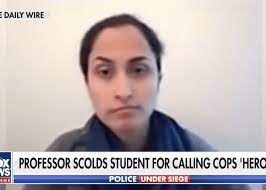 Student Braden Ellis used his communication class presentation to discuss the impact of the so-called "Cancel Culture" on Americans who want to praise law enforcement officers and call them "heroes."

A recording of the online Zoom session shows the unidentified female seemingly disagreeing with Ellis because his opinions contradict her own. The professor then appears to use 10 minutes allocated for question time to verbally attack her student's opinions and try to start an argument.

"The issue (the problem with the law enforcement officers) is systematic," she said in the video obtained by The Daily Wire.

She then claimed the police allegedly overstepped the boundaries of their authority and even acted unethically, many times, without facing any consequences.

"A lot of police officers have committed atrocious crimes and have gotten away with it and have never been convicted of any of it," she said. "I say [it] as a person that has family members who are police officers."

The remarks came after Ellis discovered many Americans had been silenced for openly appreciating the good work police officers do.

He revealed the "Paw Patrol" children's television program was censored because it positively portrayed law enforcement's role in society around the same time of Minnesotan George Floyd's death in custody. Black Lives Matter activists have used the May 2020 tragedy as a reason to protest and behave disorderly across the nation.