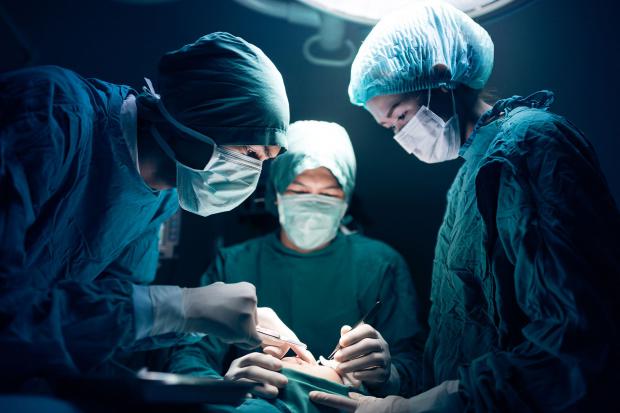 A baby girl has been spared a lifetime of disability after receiving pioneering spinal surgery — while still in the womb.

Emily Malkie, from Pennsylvania, was diagnosed with spina bifida following an ultrasound when her mother was just 16 weeks pregnant.

A follow-up MRI showed the youngster was at risk of developing brain damage due to a build-up of spinal fluid in her skull.

Her mother Rebecca was transferred to the specialist foetal John Hopkins hospital in Maryland weeks later to have the intricate operation, which has only been carried out a few dozen times worldwide

The 37-year-old was told the procedure had to be done within a four-week window between 23 and 26 weeks pregnant. Too early and the baby is still too small to operate on; too late and the damage cannot be reversed.

Spina bifida, which affects 1,500 babies born in the US every year and roughly 700 in the UK, occurs when the spine does not form properly in the womb, leaving a gap in the vertebrae.

It often leads to nerve damage that can cause paralysis in the legs, incontinence and, in some cases, spinal fluid to leak into the skull and cause brain damage.

A team of around 30 clinicians were needed to carry out the delicate procedure to repair Emily's exposed spinal cord and close the hole in her back.

The eight-hour operation involved cutting open Ms Malkie's uterus to allow the doctors access to Emily and draining away amniotic fluid that surrounded the baby.

Emily, now healthy and mobile at 20 months old, was born on August 1, 2019, weighing 5lb 15oz with no physical or mental disabilities.

Her parents say she lives a 'completely normal life' and is able to play with her siblings Hannah, seven, and Ben, five.

NHS England said the surgery has been carried out in Britain on about 32 babies in the womb since January 2020 after being pioneered in the US.