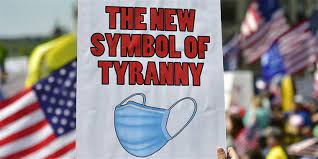 White House covid-19 advisor Andy Slavitt was first on the chopping block back in mid-February, when he was reduced to parroting empty platitudes about social distancing after failing to explain why a completely open Florida had numbers no worse than a strictly locked-down California. Then comes media darling Dr. Anthony Fauci, who has had a particularly embarrassing series of public appearances of late. During a recent MSNBC interview Fauci expressed confusion and wasn't "quite sure" as to why Texas was experiencing falling cases and deaths an entire month after lifting its mask mandates and capacity restrictions. Moreover, during a hearing with Representative Jim Jordan, Fauci completely dodged Jordan's question of why Texas has lower case rates than some of the most notable lockdown states. Fauci, refusing to answer the question, simply responded that having a lockdown is not the same thing as obeying lockdowns. Fauci was correct here, but he indirectly claimed that citizens of New York and New Jersey, two notorious lockdown states, were complying less with mitigation measures than a state that had, and still has, practically none. A quick check of Google's covid-19 mobility reports lays this counterintuitive claim to rest.

When governments and media outlets around the world have successfully captured audiences by stoking fear of covid-19, the data that should so easily assuage this fear become irrelevant, and interviews like those mentioned above are simply brushed aside in favor of a fear-born allegiance to the "morally superior" government-mandated lockdowns, curfews, mask mandates, and more. This "scared straight" approach, as Bill Maher correctly described it, is the state's bludgeon of compliance.