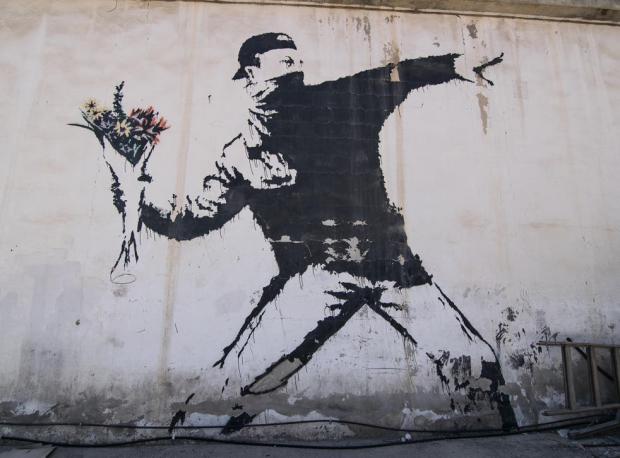 Auction house Sotheby's is auctioning the first ever piece of fine art that can be paid for using cryptocurrency.

The auction firm's New York outpost has announced that it will accept cryptocurrencies Bitcoin or Ethereum, also known as Ether, for Banksy's Love is in the Air, which goes up for sale on May 12.

The famed painting - described by Sotheby's as a 'unique work' based on an artwork first sprayed onto a wall on Jerusalem - depicts a protester hurling a bouquet of flowers.

It has a reserve price of $3 million to $5 million dollars.

'This is the first time that cryptocurrency will be accepted as payments for physical artwork,' Sotheby's CEO Charles F. Stewart said in an interview with CNBC, 'and we're really excited to make this happen.'

Cryptocurrency is money created using computer code. Those currencies and transactions made using them are authorized and recorded using secure technology known as blockchain.

Sotheby's says it is giving the artwork's seller the chance to accept payment from them in the form of Bitcoin, Ether, or to have it exchanged for regular cash using cryptocurrency platform Coinbase, which is being used to facilitate the sale.

Buyers can also pay with regular cash, or cards.

Coinbase offers a platform that lets users buy cryptocurrencies and exchange them for cash. Its experts will be on hand for the Banksy auction to manage fluctuations in the value of Bitcoin and Ether while the auction is underway.