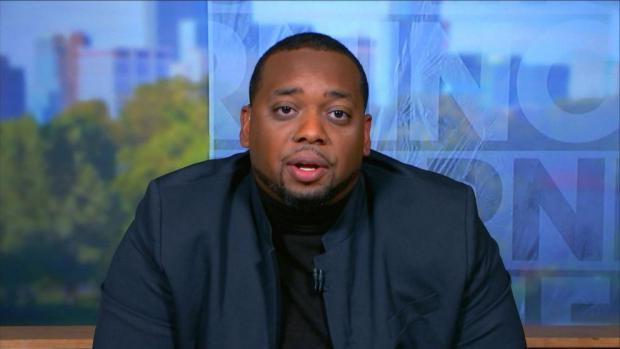 Questions have been raised about the impartiality of one of the 12 jurors who convicted Derek Chauvin of murder after it was revealed he attended a rally last summer where George Floyd's relatives addressed the crowd.

A photo, posted on social media, shows Brandon Mitchell attending an August 28 event in Washington, DC, to commemorate Martin Luther King Jr's 'I Have a Dream' speech during the 1963 March on Washington.

It shows Mitchell, a high school basketball coach, standing with two other men and wearing a T-shirt with a picture of King and the words, 'GET YOUR KNEE OFF OUR NECKS' and 'BLM'. He is also wearing a baseball cap printed with Black Lives Matter.

Mitchell has admitted the photo is of him from that date, but defended attending the rally, claiming it was not explicitly a protest against police or a commemoration for George Floyd.

That is despite the fact that Floyd's brother and sister, Philonise and Bridgett Floyd, and relatives of other African Americans who have been shot by police addressed the crowd that day.

Mitchell said he answered 'no' to two questions about demonstrations on the questionnaire sent out before jury selection.

Experts say the revelation could be grounds for the cop's appeal.