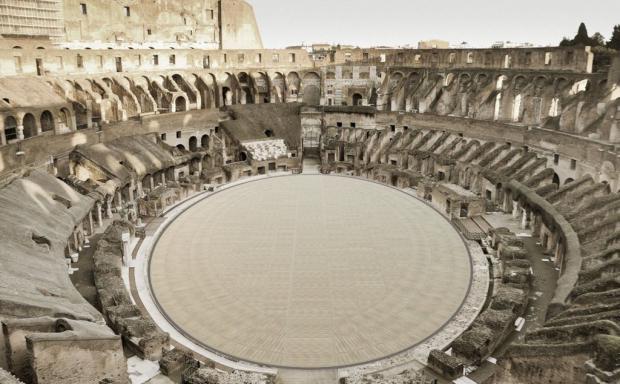 The floor of Rome's Colosseum is to be restored to its former glory, giving visitors a gladiator's eye view of the ancient amphitheatre's 'majesty'.

Italian culture minister Dario Franceschini yesterday announced a £16million contract to restore the arena floor that will enable people to stand where the legendary fighters once battled wild animals and each other to the death.

Engineering firm Milan Ingegneria has won the bid to build and install a retractable wooden arena floor, with the project set to be completed in two years.

The project – due for completion in 2023 – is reversible, meaning it can be removed if plans for the Colosseum change in the future.

Mr Franceschini said: 'In 2023, we will have the splendour of the Colosseum with its arena again.'

The new floor will consist of wooden slats fixed into a network of rails. The slats rotate 90 degrees, allowing them to be bunched up to reveal the bottom of the ancient structure.

The mobile system will be able to quickly cover or uncover the underground structures below, to both protect them from rain or allow them to be aired out.

The Colosseum – which was famously depicted in the 2000 film Gladiator starring Russell Crowe – was reopened to visitors last Monday.

The iconic structure was constructed during the reign of emperor Vespasian in AD 72 and completed under the rule of his successor, Titus, in AD 80.