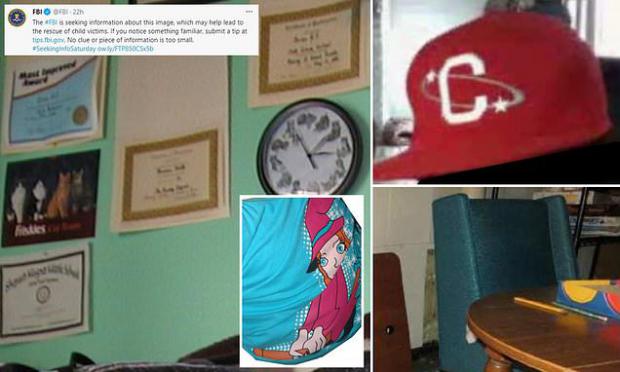 The FBI is appealing for information that may lead to the rescue of abused children, tweeting a cryptic image from inside a house, and asking for clues.

The agency issued their request for help as part of what they termed #SeekingInfoSaturday.

The photo they tweeted showed a room with white cupboards around the doorway.

A picture of a car with its doors opening upwards, like the Back to the Future DeLorean, is framed on the wall.

The agency tweeted: 'The #FBI is seeking information about this image, which may help lead to the rescue of child victims. If you notice something familiar, submit a tip at http://tips.fbi.gov.'

Among the images they showed were a red baseball cap emblazed with the letter C; a calendar, illustrated with cars; a green chair and storage chest; and a bright blue t-shirt, with a picture of a cartoon witch.

A bedroom wall was covered in framed certificates, besides a clock with images of cats.

A red stained glass window was shown in another image, with an image of a dolphin on the glass.

Tips from members of the public are hugely important to the FBI's work.