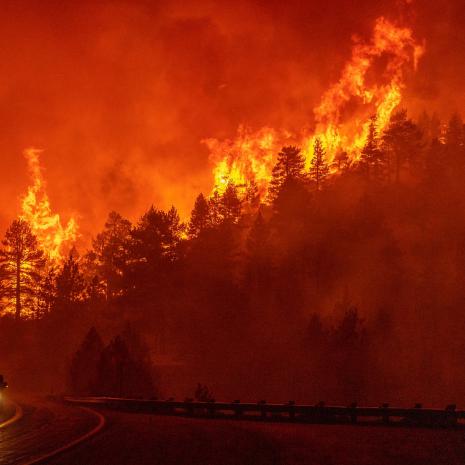 Victor Serriteno, 29, was arrested on Wednesday following an eight-month-long investigation by the Solano County Sheriff's Office into the fire.

Douglas Mai, 82, and Leon Bone, 64, were killed in the Markley Fire which began on August 18 near Lake Berryessa.

Serriteno was arrested a month later and was held in jail without bail for the death of Priscilla Castro, 32, whose burned body was found on Sept. 2 near the same lake.

Serriteno pleaded not guilty to her murder.

Castro disappeared on Aug. 16 after she failed to return home following a date with Serriteno in Vacaville, according to authorities.

The two met through an online dating app.

An investigation by the Sheriff's Office and CalFire officials has concluded that the fire was an arson and the deaths are now officially considered homicides.

Within days, the Markley Fire merged with the Hennessey Fire and became a part of the LNU Lightning Complex Fire, the fifth-largest fire in state history.

"Based on an extensive 8-month long investigation, we believe Serriteno deliberately set the Markley Fire in an attempt to conceal this crime," said Solano County Sheriff Tom Ferrara at a news conference Wednesday.

Serriteno will now face two additional counts of murder with special circumstances and arson charges, including committing arson during an official state of emergency.