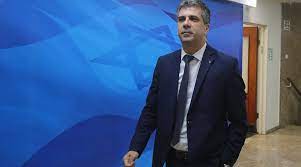 A top Israeli intelligence official has warned that if the end result of the Vienna talks is a return to the JCPOA nuclear deal, then war between Iran and Israeli will very likely follow.

Israeli Intelligence Minister Eli Cohen in Thursday comments said that "A bad deal will send the region spiralling into war" while repeating Tel Aviv's position that it will not consider itself bound politically by the terms of any future US-Iran agreement. Tel Aviv has long viewed the 2015 nuclear deal as allowing Iran's 'path to a bomb' - and so deems no part of it salvageable or valid.

"Anyone seeking short-term benefits should be mindful of the longer-term," Cohen told Reuters. "Israel will not allow Iran to attain nuclear arms. Iran has no immunity anywhere."

And this is where his remarks became particularly bellicose and threatening, saying next that "Our planes can reach everywhere in the Middle East - and certainly Iran."

The Likid member of Knesset and Minister of Intelligence further highlighted the Islamic Republic's ballistic missile program which must be stopped along with its "destabilizing other countries" and funding proxy militants throughout the region, primarily a reference to Hezbollah and allied forces in Syria.

The remarks show that Israel is certainly spooked by widespread reports of progress at Vienna, and most especially by the latest reports that Biden is mulling a "wholesale rollback" in Trump-era sanctions on Iran in order to restore the nuke deal.